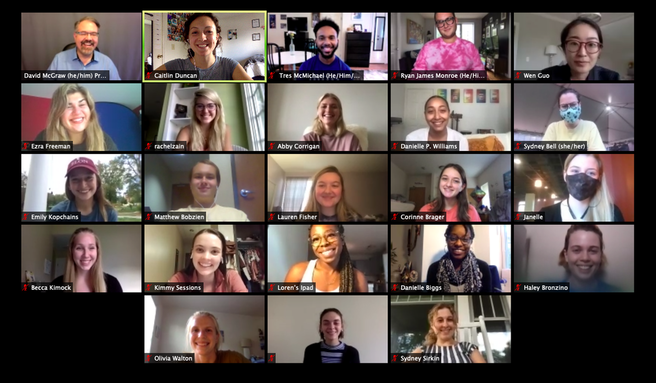 I think the classes we take as major's are really beneficial and help prepare us for work in arts administration in the future. -Emily Shade '20

In Order of Appearance
Abby Corrigan, '18, is from Columbus, OH and received a BFA in Dance Performance and Choreography and a BA in Arts Administration from Elon University. She is a New York City based free-lance dancer, choreographer and arts administrator.​
​Annsley Tarver, '18, works at the Durham Performing Arts Center as a Marketing and Promotions Coordinator for the Concert & Comedy events. She is coming up on her two year anniversary at DPAC!
Rachel Zain, '16, set her sights on making LA her post-grad home.  Rachel was hired on to Bloc Talent Agency, one of the prestigious agencies for dance in Los Angeles, upon graduation where she worked in both the dance and choreography departments and was head assistant.  After many years in the agency world, she transitioned to the role of Talent + Production Coordinator at DanceOn, a production and media company with a focus on dance and music.
Ryan James Monroe, '16, worked at The Brooklyn Conservatory of Music and The Public Theater where he led the operations team at the Delacorte Theater for two years. Ryan has lived in New York City since graduating from Elon.